The brain machine interface – it’s the BMI that could change your life” – Chief Scientist, Dr Alan Finkel. Seemly taken straight out of science fiction, electronic devices can be implanted into patients to regulate their nervous system in treatments for neurological disorders.

Neurological disorders are a major contribution to disability and death worldwide. Despite decreases in mortality rates from stroke and other disorders, the burden of neurological disorders has increased globally over the past 25 years due to expanding and aging populations. The number of patients who require care by clinicians is continuing to grow. We therefore need new solutions to help us tackle these challenges.

Graeme Clark Orator, Professor Timothy Denison knows that “it’s our first instinct to look to pharma” for the answers. He poses an alternative solution: he is integrating electronics to treat disease in the hope that bioengineering and electric devices will be paired with pharmacology to provide optimal solutions in healthcare.

As the network of nerve cells and fibres in the nervous system use electrical impulses to communicate, it’s no surprise that bioelectronics has significant potential to treat a wide range of neurological disorders. Bioelectronics involves implantable devices that monitor brain signals, and stimulate or block nerve function inside the patient’s body as needed. Hundreds of thousands of patients currently rely on bioelectronic systems inside them to alleviate their symptoms of Parkinson’s disease, epilepsy, chronic pain, and incontinence.

The concept of bioelectronics has been around since ancient times – prior to the discovery of electricity. The ancient Greeks used electric rays (torpedo fish), fish that can produce an electric discharge to stun prey or for self-defence, to numb the pain of childbirth and surgical procedures. The “Torpedo’s shock”, which had the power to stun and numb, was described by Aristotle and Plato, and later taken up by Roman physicians to treat headaches. 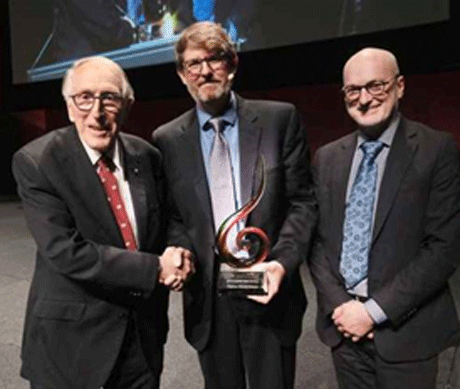 Today, neurostimulation is a hot topic in the biotechnology and health spaces, as it has the potential to transform treatment for patients. Direct brain stimulation, for example, is used as a treatment for tremors in Parkinson’s Disease, providing a 20% improvement in patients’ ability to perform fine motor skills. Denison’s aim is to improve this figure without triggering any undesirable side effects. He notes that it’s important to be aware of anything that can go wrong so that it’s possible to find a solution before it does go wrong. With the technology behind brain machine interfaces and bionics rapidly developing, bioelectronic systems can only get better from here.

Denison has developed electric circuits that, instead of merely stimulating the brain, incorporate it into the system as a “co-processor” – allowing for the incorporation of a feedback loop. For example, many thermostats in buildings monitor the environmental temperature and only actively heat when the temperature falls below a certain level. Similarly, electrodes are placed in the brain to monitor brain wave frequency oscillations (the sensorimotor rhythm) and only turn on stimulation when required (i.e. when a patient has the intention to perform movements). Otherwise, the stimulation is turned off. This increases the longevity of the device, uses less power, and decreases the risk of side effects due to stimulation.

There are drawbacks of the current bioelectronic systems as they often remain unchanged in contrast to the rapidly changing and reactive activity of a patient’s nervous system. Denison is developing universal, programmable systems that allow these systems to be adaptable for a range of diseases and tailored for specific individuals – it will act as a blank slate that can be moulded on a personal basis.

Advancements of new technologies in healthcare, such as this, are made possible through convergent science. “My background in anthropology has served me just as well as my ability to do calculus,” says Denison. His work has been pioneered by neurosurgeons, neuroscientists and electrical engineers working together, as well as the patients in clinical trials – “they’re the true heroes who will propel this field”. Denison advises that with all these new opportunities for patients, we need to be cautious about neuroethics (ethics associated with our increasing capability of monitoring and influencing the brain) and risk management, and that’s where working in large, interdisciplinary teams come into play.

The only way to build on science is to build new tools”. Denison’s innovative platform can be easily adapted as our knowledge of nervous systems improves and the technology develops. His devices will allow us to move towards electronic prescriptions based on patient data, seizure prediction and memory improvement in epilepsy, and emotional and sensory processing in chronic pain and depression based on individual needs.

“You can run a brain on four segments of chocolate per hour while a machine would require the power of an entire house to achieve the same processing power” – Alan Finkel. The brain is a truly remarkable organ and Denison’s work is making leaps and bounds to decrease the burden of neurological diseases.